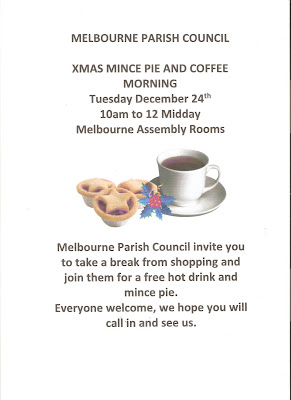 Car Park Update for Melbourne
MARs
SDDC Order for repainting has been placed with their contractor and work is expected to be carried out w/c 9-12-19 or 16-12-19. SDDC will make contact with Andy Heafield to agree date & time and will be on site with contractor to ensure white lines give maximum efficiency in car park. They are happy to mark out a place for the Melbourne Community care Bus.
SDDC Car Park
Phase 1
On same date as above works an extra 20 car parking spaces will be marked out as 3hr car parking bays in the car park behind the Melbourne Inn. These will be the central block (2 x rows of 10) that are at the top end of the Car park adjacent to the current 5 x 3hr car parking spaces.
SDDC Enforcement of 3hr parking spaces will follow thereafter.
Further phases
To follow on;
Possible relocation of recycling facilities to another site in Melbourne to create extra spaces
Possible change in rules regarding unlimited parking to ensure that there can be no “airport parking” or “round the clock” car parking including possible introduction of cameras with ANPR for enforcement.
Possible introduction of height barrier to prevent unauthorised us by larger vehicles.
Posted by Sheila Hicklin

Here are the bin collection details for Melbourne over the Christmas period
Weds 18th Dec Black Bin as normal
Weds 25th Cancelled - would have been green and brown bins
Tuesday 31st Dec Black Bin emptied instead of the following day
Weds 1st Jan Cancelled
Weds Jan 8th Green and brown bins emptied
In addition, open cardboard boxes containing bottles and cans can be put out next to the bins for recycling
Additionally, the High Street Carpark, behind the Melbourne Arms, will have cardboard collection banks from Dec 23rd to Jan 4th
Please remember that wrapping paper with glitter or sparkles should be put in the black bin as it cannot be recycled.
Also Christmas Cards, though some supermarkets collect them for recycling
Posted by Sheila Hicklin

Due to it's popularity last year The Parish Council is once again providing a bouncy castle in the Lothian Gardens 2pm till 4pm on Wednesdays 7th ,14th ,21st and 28th of August .
Posted by Sheila Hicklin

In accordance with Neighbourhood Planning (General) Regulations 2012, Part 5, 14 (a)-(c), notice is hereby given that a formal pre-submission public consultation on the Draft Melbourne Neighbourhood Development Plan will start at 9.00am on Monday 20th May 2019 for a period of 6 weeks ending at 5pm on Tuesday 2nd July 2019.
Melbourne Neighbourhood Development Plan (the NDP) has been developed to help deliver the local community’s requirements and aspirations for the Plan period upto 2028. The NDP has been created through listening to the views of the residents of the parish.

The NDP will provide a means of guiding, promoting and enabling balanced and sustainable change and growth within the designated area of Melbourne and Kings Newton. Melbourne Parish Council invites comments on the draft NDP. All responses received will be considered by the NDP Working Party and the Parish Council to inform a revised version of the NDP. The revised version of the NDP will then be submitted to South Derbyshire District Council, as the local planning authority, for examination by an independent examiner.

The report on the responses to the residents’ questionnaire survey and the other information that has informed the creation of the NDP can be viewed online at www.melbourneparishcouncil.org.uk. Paper copies can again be viewed at Melbourne library.

Response forms maybe deposited at Melbourne Library, may be posted to the Clerk to the Parish Council at PO Box 8366, Derby, DE65 9DX or scanned and emailed to melbourneNDP@gmail.com.,

Please note in accordance with GDPR, all responses will be forwarded as part of the submission process to SDDC, this will include the forwarding of personal data, such as email address, names, addresses and telephone numbers.

All comments must be received by 5.00pm on  Tuesday 2nd
Posted by Melbourne Parish Council

Two quarters of the cemetery have now had memorials tested, this completes the 2018 and 2019 quarter-phases of testing. Repair work is now underway in these sections and the remaining two quarters are scheduled to be tested in 2020 and 2021.
The tested side, (which is the unconsecrated Melbourne side), has had over seventy stakes removed leaving just three staked memorials that were deemed too unsafe to leave unstaked, These seventy memorials have been repaired and re-tested to ensure they are now safe.
One stone that had been laid flat has now been re-erected and more of the laid stones, (from earlier test carried out over the last few decades) are being considered for re-erection in the coming months.
Further work is required such as turning stones over that have fallen face down and repairs will continue to be carried out on the consecrated Kings Newton side when safety issues become apparent.
Should any member of the public discover a memorial to be potentially dangerous they should call the Sexton on 07966 461416.
Posted by Melbourne Parish Council